It looks like my 2011 iMac might be on the way out. I’ve been having odd graphical problems today and yesterday, and I think that it might be the graphics card overheating. Running Apple Diagnostics (Hardware Test as was) reports an error with the hard drive (the fan specifically) which I’ve seen before. My working theory at this point is that a failed or obstructed fan coupled with dust build-up and the fairly hot room has led to this point. 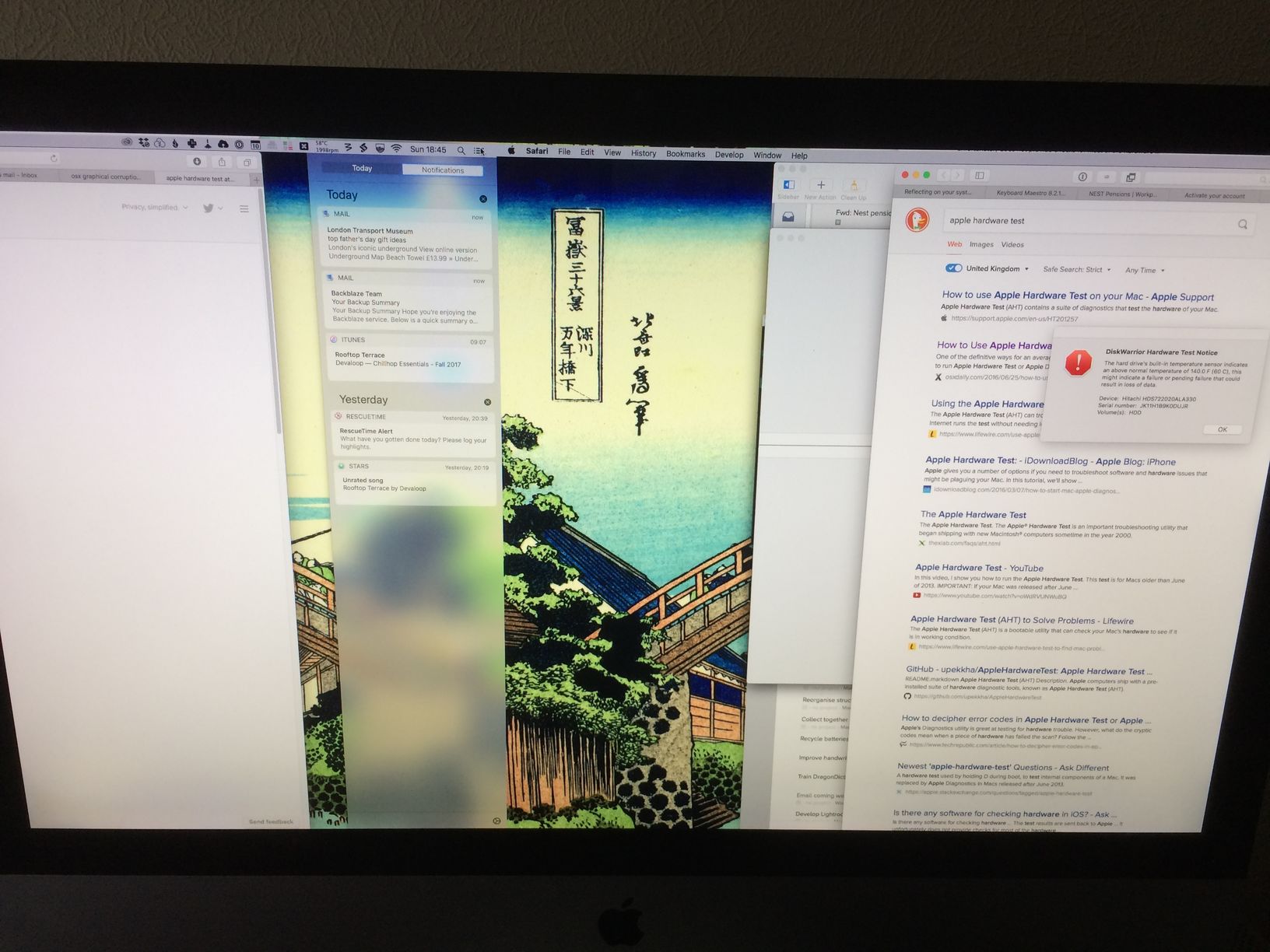 I’m going to get some compressed air and see if that helps matters at all, and then see if I can get it serviced. Unfortunately Apple now lists the 2011-model iMac as obsolete (or “vintage”) so we’ll see how that goes.

Funnily enough, this is not the original graphics card but a replacement installed by Apple when something similar (but not quite the same) happened several years ago, sorted out just before their replacement period ended (it was an acknowledged, somewhat widespread problem with the cards).

Honestly it’s happened at a bit of a naff time. The machine is otherwise fine, and it still feels incredibly fast (which I put down to the SSD). I was hoping it would last as long as many of the machines we have at work, almost all of which are from 2008 (despite what other press reports claim), though they do feel sluggish — particularly the couple that I (foolishly) upgraded past OS X 10.6. I was certainly not planning to replace it yet.

It would be an expense that I could do without too — having just bought a real chair and weird keyboard in anticipation of having to do much more work at home from October when I start an evening Masters in Computer Science at Birkbeck.

Which brings us neatly to the real annoyance about this: I was planning to buy a laptop to use on the course. I’ve bought a couple of bottom-end MacBook Airs for reporters at work, and they seem like decent enough machines. This idea was on the assumption that it would not be my main computer, so it could be less capable as I would be using it for focused tasks and leaving everything else — including much of the academic work of the course — to be done on my giant iMac at home.

But if the iMac isn’t in the picture anymore, what should I do? As I see it, I have two feasible options:

I spent a lot of money on the 27" iMac in October 2011, buying more than I needed really (partly because I was still playing computer games then). I wouldn’t replace it with something as high-end now as I know that I just don’t need the power, and I want to minimise the hit to my savings.

Part of me thinks that I should buy a MacBook Air now, according to plan but sooner than planned. Then I have something to tide me over other than a six-year-old iPad (running iOS 9!) and a five-year-old iPhone 5S, and then I can try to get the iMac fixed or replace it at a later date. (I’m also a bit anxious to buy the Air sooner rather than later, even though it’s still basically an old design, as I don’t really want to risk having to buy a laptop with a dodgy keyboard and only a couple of those odd USB-C sockets.)

Then the other option is to shelve completely the idea of buying another desktop and just buy a more powerful laptop. This appeals to me less, because I do want a bigger screen and I do want more storage.

I’ve been throwing the storage matter around in my head today and I can’t decide on a position. Backblaze tells me I have 530GB backed up, most of which is my iTunes library, so I don’t know if it’s a bit of a distraction — if I only had a laptop I’d have to keep it on an external drive at home, and is that so different from keeping it only in an iMac on my desk?

It’s difficult to know what to do. My gut feeling is to rush out and buy a basic Air immediately so as to not interrupt my life too much (particularly, I need to change jobs before the course starts as the hours don’t fit; this is not a secret to my boss or colleagues).

But my head says that I should see if I can crack on using my iPad for now, enquire about getting the iMac serviced as soon as possible, and then make a more considered decision at a later time.

It’s not a comfortable position for me, since this machine has been a fixture in my life for over six-and-a-half years. When the graphics card went last time, it was calming to know that it was a problem that Apple had committed to take care of (even if I almost missed the cutoff and had to drag the heavy thing all the way to Chafford Hundred on the train). No such luck this time.

(On a, er, positive note, I guess this will finally force me to work out a way of blogging from my iPad that isn’t as painful as I’m sure it will be to get this post up. [Later: It took some faffing about and too much manual work, but having (an old version of) Coda and shell access to my Linode server did the trick fine.])