When I moved from south-east London to east London last year, one of the things I was looking forward to was fairly quick access to CS2, a substantially-segregated route from Stratford to Aldgate.

To get to CS2, I go from my home in Leyton to the northern half of the Olympic Park via Temple Mills Lane and Honour Lea Avenue. From there it’s a nice, traffic-free cycle into the southern half of the park.

But at that point you need to make a decision where you need to go because there’s no traffic-free or segregated way of reaching CS2 on Stratford High Street from the park. (We built a massive naff-off Velodrome but won’t give people a safe way to get to it from the main road. It’s ludicrous.)

I’ve generally gone to the roundabout at the junction of Montfichet and Warton Roads, then down Warton to Stratford High Street, and then turn right at the crossroads into the segregated CS2.

But Warton is a horrible traffic sewer, being one of the few ways to get from Stratford proper to the Westfield shopping centre. Newham have recently installed a series of raised tables and raised crossings in an attempt to slow the traffic, an example of tackling the symptoms rather than the cause. It’s not pleasant to cycle and a couple of years ago the junction with Stratford High Street was ranked as one of the most dangerous for people on bikes.

Coming the other way, eastbound, things have been made worse by the Weston Homes development along Stratford High Street, with sections of the segregated tracked regularly closed. This forces people on bikes to join a lane of fast-moving traffic.

Take, for example, the surprise cones captured by @SW19cam: 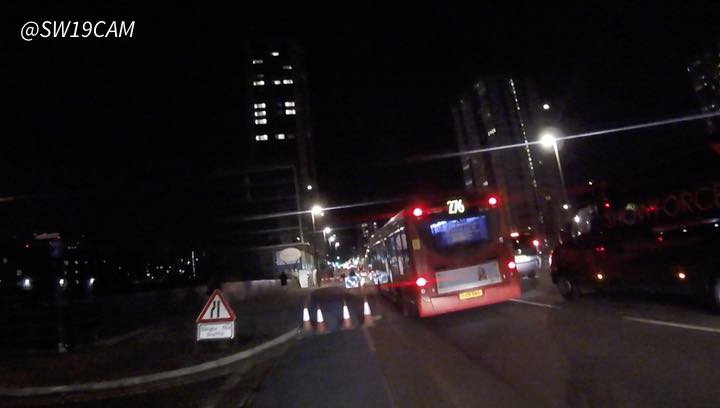 The sadly typical “Cyclists sod off” snapped by @RossiTheBossi, complete with van sitting in the track: 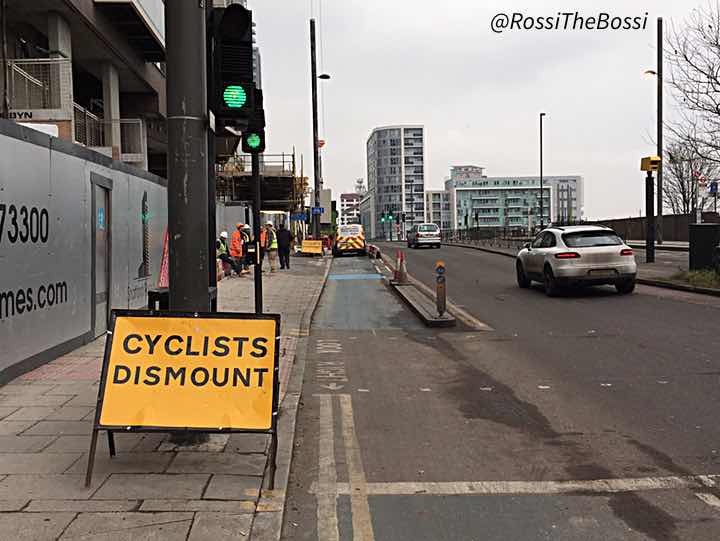 And then there’s Lucia Quenya’s video of the mess:

I now try to avoid this section of CS2 when heading home and — spurred on by Diamond Geezer — I think I’ve settled on a largely traffic-free route that avoids Warton Road and the Weston Homes works. Here’s a modified screenshot from Google Maps: 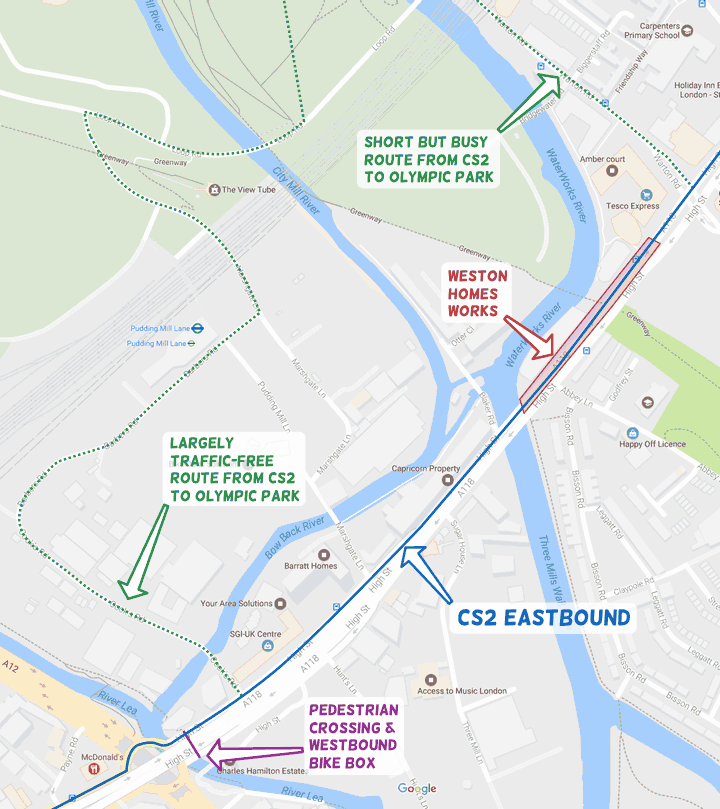 Basically, heading east, you take the first left after Bow roundabout (into Cook’s Road), follow the road round, and then turn left after Pudding Mill Lane DLR station. Turn right at the lights, then go up the dropped kerb immediately after the bridge. That puts you in the big chunk of empty ground to the south of the Squiggle and you can go on your merry way.

Heading west it’s the same until you reach the junction of Stratford High Street, but at that point dismount and head for the pedestrian crossing to your right. You can then join the advanced stop box heading west.

The route shown in the map above isn’t direct by any means, and you may encounter the odd large vehicle between Loop Road and Stratford High Street — whether construction or industrial. It’s also likely to be impassable on West Ham home match days.

It’s not a great trade-off, and it’s crackers that this is even necessary if you want to avoid motors so close to the Olympic Park (#Legacy) and the CS2 extension — the first CSH section that was substantially segregated.

But that’s the situation we’re in.