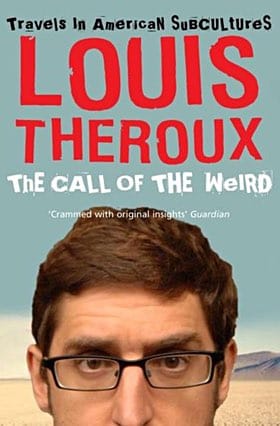 Louis Theroux’s first and so far only book, published in 2005, is the funniest thing I’ve read in a long, long time. We’re talking out-loud laughs. The kind of laughs that make you not want to read it on the Tube because other people will think you’re crazy and stare at you but you can’t put it down and end up looking mental anyway.

Theroux goes back to the US to catch up with people that he’d interviewed in his Weird Weekends series and stand-alone documentaries, calling it a “reunion tour”.

Half of that is the writing — done in a very similar way to Theroux’s voice-over bits in his films. It feels very human, very honest — reinforced by him being upfront about parts of his “reunion tour” that aren’t going as he’d hoped.

That’s one of the best things about the book, that he’s very open, and has changed my view of Theroux in a subtle but substantial way. He always came across as smart but also that he was putting on a persona for interviews, and behind it was sort of a cold calculation of how to get the most out of people.

But The Call of the Weird makes it clear that what you see in the documentaries is him, that he’s being genuine with his interviewees. Rather than naive-sounding questions being asked in an attempt to squeeze people for shocking or funny responses, he asks the simple questions because often they’re the best ones you can ask.

Even though there are ten chapters, I blazed through the book in about a week and couldn’t bear finishing it — I just wanted more stories. Highly recommended.